Three events were held in the Renmark area over the Anzac weekend, possible with a Monday public holiday in some states including SA.  Two of the events were National Orienteering League events, so many junior and senior elites attended.  In addition a number of interstate orienteers in other age groups attended, pushing the numbers for the Saturday and Sunday events over 200.

The Saturday afternoon event was a Middle Distance at Bunyip Reach, with the map extended from that used in 2018.  For elites this was also a World Ranking event, with juniors and seniors doing the same course. Steve Cooper set some challenging courses through the complex erosion gullies. The event was run by Yalanga Orienteers and the controller was Phil Hazell.  For results and splits see the links here. The M65A  W45A  W55A course: 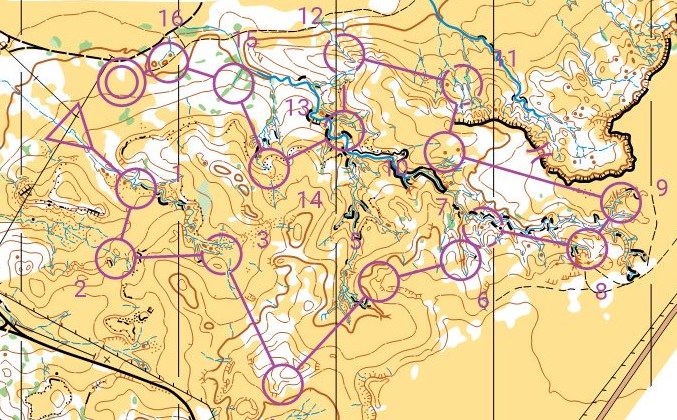 Sunday’s SA Long Distance Championships included a mass start loop race for the 4 NOL groups (senior men and women, junior men and women in classes 20E and 18A).  The 2 senior classes and junior men had a run through after a short first loop to collect the map for a longer challenging second loop.  Other classes used the traditional interval start.  All courses, which covered the more sublte terrain on the ridge top into the compelx erosion gullies flanking the ridge, were set by Simon Uppill, with the controller Jenny Casanova and the event by Onkaparinga Hills Orienteers.   For results and splits links here  Mass start for each of the 4 elite courses below, and the course for the a second loop of the M21E course. 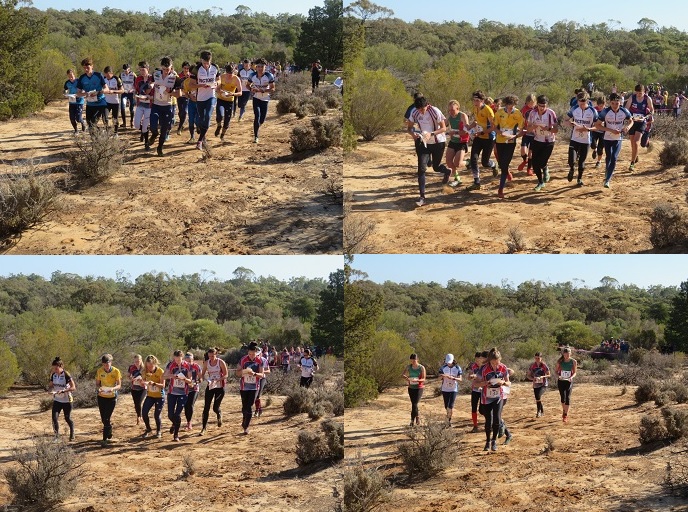 Monday’s sprint event at the Renmark schools set by Lanita Steer with the event by Tintookies, was a more relaxed event to finish off the weekend.  Results and splits are here

For many more photos of the Sunday event see the Facebook album: https://www.facebook.com/media/set?vanity=OrienteeringSA&set=a.4033129866754003

And other posts about the weekend events - https://www.facebook.com/OrienteeringSA 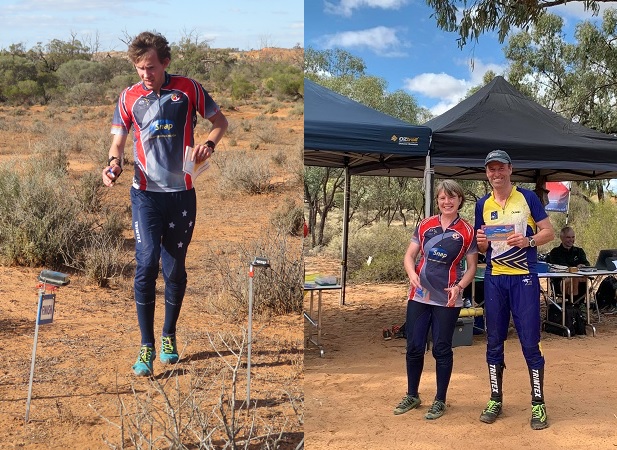 The Easter Carnival was centred on Orange, NSW, this year after a twelve month deferral due to Covid 19.

Then it was into the rocks and bush of the Three Days, and what an orienteering test it was. Day One on Noah's Ark was a great introduction to what was to follow on the Gumble Pinnacles the next two days. Considering the number of " did not finish " and long course times, this map arguably certainly lived up to be one of the most challenging in Australia. To finish at all could be considered by some a success, (myself included), and I noticed many miserable participants wandering aimlessly around in a sea of large boulders. Many courses did not achieve the expected winning times, even when experienced orienteers had relatively mistake free runs, and many competotors chose to abandon their courses on Day 2 ( much greater number than normal for this early season event).

All resutls are available in Eventorand you can view courss in the LiveLox link (although you need to be a subscriber to run full replays of those who have uplaoded their routes).

Photos of some SA orienteers by Evalin here - https://evalinmae.smugmug.com/Orienteering/NOL-2-SA-Orienteers/ 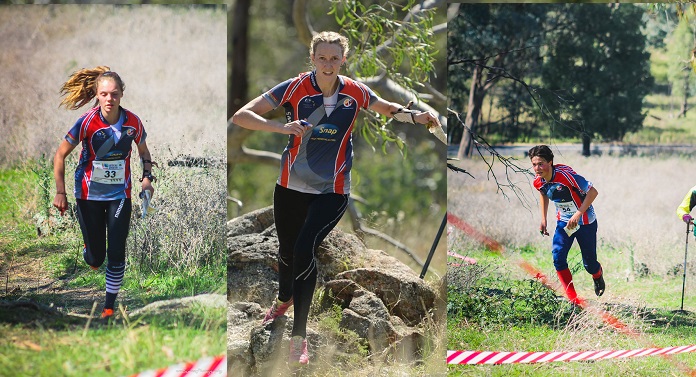 Following are some of the main things happening during May: 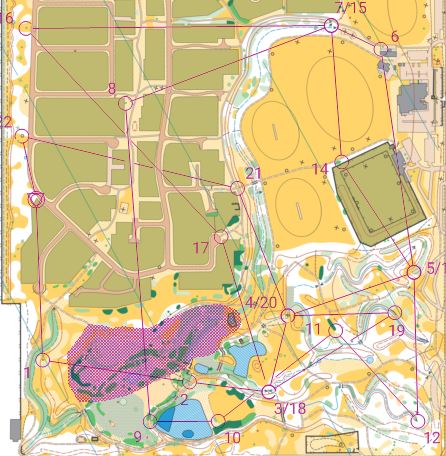 The event at The Paddocks on 1st April was held in ideal (cool but dry) weather for orienteering.

After a wet night, the weather cleared, and the four courses that Jeffa had set were a great puzzle for those who attended.  The tricky wetlands area, and the new out of bounds area (discovered in the previous week) were fun to negotiate, and Jeffa’s tricky planning had us all thinking hard.

Thanks to Tintookies members who assisted to make this a success for the 52 runners.

The brief AGM was held at 12noon, where we duly elected Rob Tucker as President for another year, along with Andrew Kennedy (Treasurer) to be ably assisted by Brodie Dobson Keefe this year. Erica Diment will continue as Secretary, Robin Uppill as Technical Officer,  Zita Sankauskas as Schools Coordinator, Bridget Anderson as Coaching Coordinator, Olivia Sprod as Publicity Officer and Frank Burden as Newsletter Editor.

From late April through May, 4 events are being provided to provide orienteers to try out orienteering in the suburban environment but with a flavour of bush orienteering at some events. At each event, several courses are available, shorter easier courses for the less experienced and longer more challenging courses for the physically fitter or more experienced orienteer. You can complete a course as an individual or in a group, and do at a pace which suits you (run or walk). 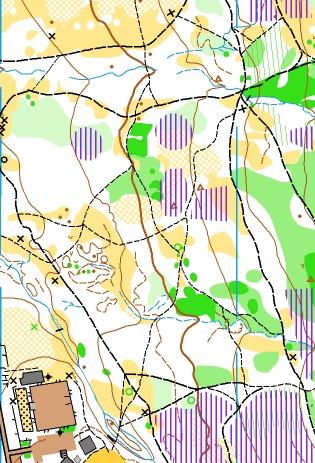 The series begins at Wadmore Park, Athelstone (small map snippet at left) – Black Hill in Athelstone (Sunday April 29th). The second event (Sunday May 6th) at Heathfield includes a detailed map around the Heathfield HS (map snippet below) with a larger map extending to Woorabinda Reserve for the longer courses. A more urban style event is to be held Saturday May 12th at Stonyfell,   The fourth event on Sunday May 20th is in Shepherds Hill Recreation Park. In conjunction with the foot orienteering courses will be a Mountain Bike event.

At all events, more experienced orienteers will be on hand to assist newcomers and those with less orienteering experience.  Participants can enter at each event, arrive between the designated start period in the event details.  Links to event information are in the event list on the right of this page. 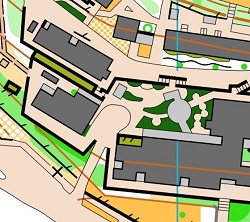 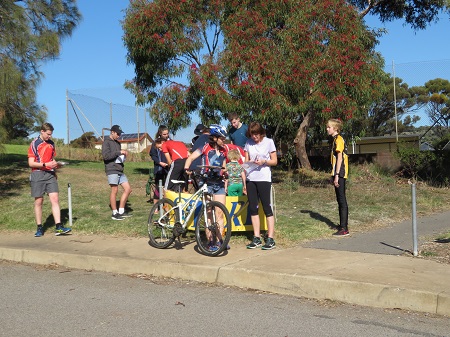 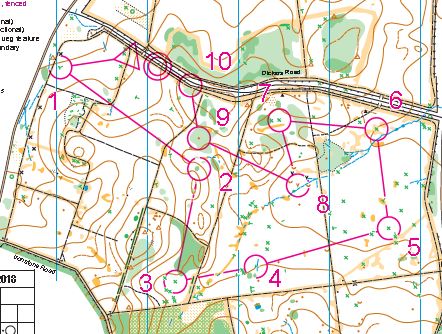 94 persons participated in this rain-affected event. The weather and some tricky controls posed problems for many.

Click here for all results & links to winsplits, splitsbrowser and route gadget.Voting for the Course Planner Award can also be found here

Don't forget to log in to Eventor & fill in the Event Survey. We would like to know what you think. Include your name if you don't wish to be anonymous or wish a reply.